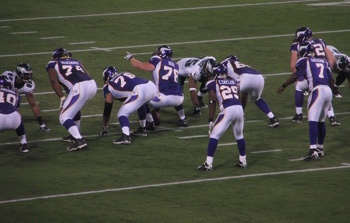 Despite the fact the Minnesota Vikings have only won one NFL Championship, they have a long, interesting and relatively successful past. Joining the National Football League (NFL) in 1960 as an expansion team, they first took to the field in 1961. As might be expected for a new franchise, the early years were unspectacular but things changed in 1967 when head coach Bud Grant was hired and it was under him that the Vikings had their most successful period in their history.

Building a team with a ferocious defensive line known as the Purple People Eaters that included Alan Page and Carl Eller, the Vikings qualified for the playoffs in 10 of the 11 seasons between 1968 and 1978 and appeared at the Super Bowl four times, being defeated in every one. This record has only ever been matched by the Buffalo Bills team of the 1990s.

The 1980s were largely uneventful for the Vikings, winning two division championships in 1980 and 1989. It was also the decade that saw them make a disastrous trade in 1989 with the Dallas Cowboys. Minnesota gave up draft choices that were used to select future NFL icons Emmitt Smith and Darren Woodson whereas Minnesota were landed with the disappointing Herschel Walker in return.

The late 1990s and the early 2000s were better for the Vikings, now blessed with a fantastic offense that including wide receivers Cris Carter and Randy Moss, as well as the respected running back Robert Smith. In 1998 they smashed the then NFL points record on their way to a 15-1 record but were unfortunately beaten in the NFC Championship game by the Atlanta Falcons.

Played at the Tulane Stadium in New Orleans on January 11, 1970, Super Bowl IV saw the Minnesota Vikings take on the Kansas City Chiefs. A largely one-sided affair, the Chiefs scoring 20 points before the Vikings replied in the third quarter with seven of their own. The Vikings were eventually defeated 23-7 watched by over 80,000 in the stadium and over 44 million viewers at home.

Matching two of the game’s best defences, Super Bowl IX was played at the Tulane Stadium in New Orleans and was watched by a total TV audience of over 54 million viewers. Once again, the Vikings found themselves dominated by the opposition and found themselves 9-0 down at the end of the third quarter. Despite rallying with seven points in the last quarter, the Pittsburgh Steelers added another six points to their total resulting in a 16-6 win.

Super Bowl VIII saw the Vikings take on the Miami Dolphins at Rice Stadium in Houston, Texas. The Dolphins dominated the game and they scored 24 unanswered points during the first three quarters. The Vikings managed a small comeback in the last quarter with seven points but it was not enough to overturn the Dolphins’ lead.

The final AFL-NFL World Championship before the two leagues merged, Super Bowl IV was played at the Tulane Stadium in New Orleans. With over 80,000 in attendance and over 44 million TV viewers, it saw the Vikings dominated and outplayed by the Kansas City Chiefs despite the Vikings going into the game as favourites.

Before playing at the newly built U.S. Bank Stadium, the Minnesota Vikings played at the Metropolitan Stadium in Bloomington, Minnesota between 1961 and 1981 and then at the Metrodome from 1982 until it was shut in 2013 and 2014 and 2015 saw them play at the TCF Bank Stadium at the University of Minnesota.

The new U.S. Bank Stadium was opened on July 22 2016 and is the first fixed roof stadium built in the NFL since the Detroit Lions’ Ford Field was built in 2002. The overall cost of the stadium is thought to be over $1 billion, shared between the state of Minnesota, the city of Minneapolis, the Vikings themselves and various other private investors. Naming rights were sold to the U.S. Bank for $220 million over 25 years.

The Vikings owners originally wanted an outdoor stadium but state and local governments would only provide the cash for an indoor stadium as a retractable roof would have been too expensive. The stadium will have a capacity of 65,000 for most games but will be expandable to 73,000 for special events.

One of the most mobile quarterbacks to ever play the game, Tarkenton played for the Vikings between 1961 and 1966 and 1972 to 1978. He racked up a total of 33,098 yards and 239 touchdowns through the air and on the ground managed 2548 rushing yards and 22 rushing touchdowns. Still fondly remembered by Vikings fans young and old as one of the best ever players to pull on the Vikings shirt.

One of the greatest wide receivers of all time, Moss was 6ft 4 and could run 40 yards in just four seconds. Still available in the 1998 draft at the 25th pick, he immediately took the NFL by storm with the Vikings with 69 catches for 1313 yards and 17 touchdowns. A tough, quick and dynamic player, he is and always will be a Vikings favourite.

Alan Page was the focal point of the Vikings’ Purple People Eater defensive line. Crushing their opponents, it was one of the greatest defensive lines in history and Page led it efficiently. As a Viking, Alan Page made the Pro Bowl on nine consecutive occasions.